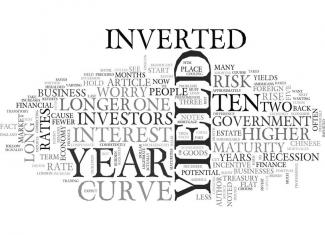 Recently, the headline news was about the U.S. yield curve “inverting,” and what this might mean for the economy and markets.Inverted Yield Curve

Where Are We Today?
The yield on the 10-Year Treasury note dropped from 3.23% last November to 2.42% a week ago, putting it slightly less than the yield on the 3-Month Treasury bill and creating a small inversion. While yields could invert anywhere along the maturity spectrum, investors and economists typically focus on the 3-month vs. 10-year maturity. As of today, we are not inverted, as the 3-month yield is 2.43% and the 10-year is 2.49%.

What Does an Inversion Mean?
In an inversion, short-term yields exceed long-term yields, signaling worries about future economic weakness. The last seven U.S. recessions since 1965 were preceded by an inverted yield curve – so an inverted curve is not a good thing. However, there were two inversions during this period that were not followed by recessions. So, an inverted curve doesn’t always mean a recession is imminent.

Other Observations
An inversion needs to last for a while, such as a quarter, to provide a solid signal of the risk of economic weakness. An inversion that lasts a few days, such as the most recent one, is not very convincing.

Even when a prolonged inversion happens, it is a very impractical market timing tool. The number of months between yield curve inversion and a recession has averaged around 14 months but varied from a low of 8 months to a high of 24 months over the past 60 years. In addition, the time between an inversion and a peak in the stock market has ranged from 5 months to 21 months over that same period.

All that we can glean from today’s relatively flat yield curve or last week’s brief inversion is that investors, while watching a U.S. economy that is still expanding, have some worries about the slowing of the growth.